by The Cool Greenhouse 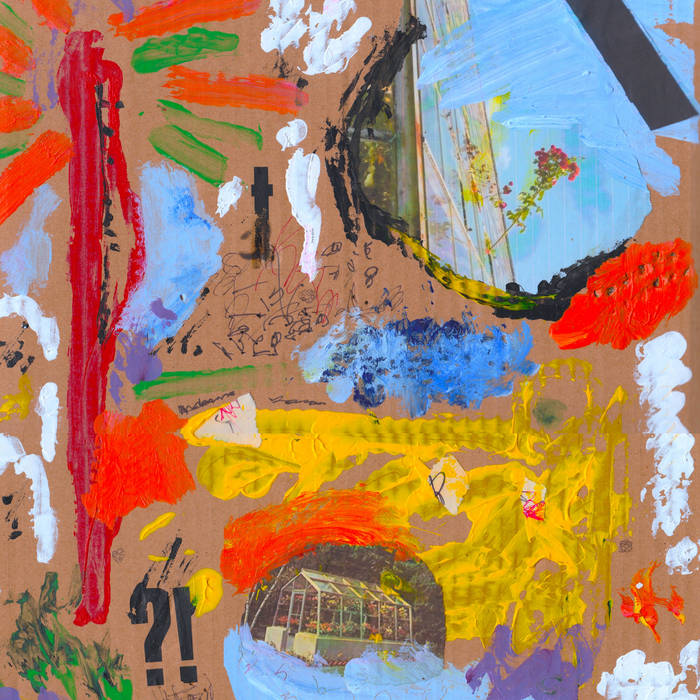 rat disco the LR 10 inch was very good (but sadly now being sold at collector prices). now there is also a green 12 inch. i like the sticks. i will like the other tracks too. good band yes, thank you!

“The Cool Greenhouse exist in diametric opposition to me and you and our stupid short attention spans.” - The Quietus

Those in glass houses shouldn’t throw stones, but The Cool Greenhouse are about to shatter glass ceilings with their self-titled debut LP.

Having caused a stir on the underground DIY label circuit with their inimitable, infectious brand of lo-fi post-punk in 2019, The Cool Greenhouse’s debut album shows off a newly developed, fuller sound, taking their signature style to previously unexplored heights while doubling down on their tried and tested formula of angular motoric riffs and no holds barred biting social commentary. The muffled 16-bit drum loops have been replaced with a full kit, the nonchalant vocal delivery has found a new edge and the sparse instrumentation has been augmented by the band’s finally agreeing to leave their bedrooms and enter the studio, yielding a fully-realised vision with fresh clarity and depth that makes their earlier recordings seem like mere blueprints.

Stubbornly refusing to engage with almost every fundamental musical tool available (the chord, melody, choruses, even the musical change), The Cool Greenhouse have somehow managed to compile an album of eleven songs that often comes astonishingly close to pop. Their attachment to long songs with single hooks that steamroll through their entireties has not abated, but neither has their inexplicable knack for keeping these strange creatures alarmingly engaging and accessible when by all logic they should be irritatingly avant-garde. It shouldn’t work on so many levels, but it absolutely does.

A large part of what makes this a winning formula is frontman Tom Greenhouse’s way with words. Frequently topical and clearly political in some sense, Greenhouse’s lyrics side-step the on-the-nose delivery of traditional yawn-inducing political rock in favour of a strange idiosyncratic blend of pop culture snippets, patchwork narratives and oblique literary references. Bursting with humour and irony, the album deftly meanders from Rotary Club jumble sales to Margaret Thatcher’s living room to futuristic voyages into musical VR, taking aim at the gammon classes, rural conservatism and a host of other late-capitalist absurdities with razor-sharp wit along the way.

Discovering that The Cool Greenhouse’s first 7” magically mentioned his own name, producer, sound engineer and mixer Phil Booth (Sleaford Mods, The Wave Pictures) invited the group to record the album in his JT Soar studio in Nottingham. The old potato-packing warehouse offered the ideal working environment for the band, who recorded the album over seven days as live between kipping on its couches, 4am whiskey-soaked sessions and Mario Kart ’64 on demand. “The sessions were stuffed with weird little synchronistic miracles” Tom tells. “Discussing a song then seeing its title on a shop window, finding things in pubs straight out of our songs…these zapped me onto some sort of Jungian plane where I didn’t need to sleep and knew exactly what to do.”

Having sufficiently impressed Melodic Records enough for them to sign them on the basis of their first ever show, the band have continued to delight and disorientate live audiences in equal measure, supporting the likes of The Stroppies and Do Nothing. Also championed by DIY and 6 music, their upward trajectory shows no sign of halting as they prepare for their Great Escape debut, with a host of other festival appearances yet to be announced.

Track Name: The Sticks
Well you can go a bit nuts out here
Spending all day looking for your cigarettes or your glasses
Or plugged into high-minded conspiracy theories
About all the piano-playing cats,
Trained by the government and uploaded by devious civil servants
to subdue your mind
And I guess that’s why they say that musical pets
are the new opiates of the masses
But just don’t forget
That nobody actually says that

So is this the kind of catharsis you were  after?
Strange shapes appear in the mirror when you’re not there
And you can hear people’s skin crack at regular intervals
When the sun comes out
They’re all engaged in projects of a strange nature:
Fixing watches at the weekends
Or handing out unintelligible leaflets
for no reason
They’ve got your number
They’ll be seeing you
Better stay in from here on in…

Make some elderflower wine, or some sourdough
Well that’s the kind of thing you’re meant to do around here
Wrap it up in old brown paper and you can sell it for a fortune
To all the city weekenders

If only you didn’t have the weird feeling
that your arm is not your arm.

And the strange plants growing in the outcrop near the village
Have been plagiarising your dreams.

And everything’s conducted in hushed tones
In the market towns

Bandcamp Daily  your guide to the world of Bandcamp